1. the kinds of games/art/projects that when you propose them to a company, they would never make them.

2. the things that you are scared of making because you don’t think they would be successful.

3. the things that aren’t made unless somebody takes a chance.

as an artist, it is our duty to make the Nevermakes – if we don’t make them, who will?

make something just for the sake of making something. even if you never show anyone, just keep it for yourself and know that you created it

make something that makes you feel something. anger. sadness. hunger. just feel.

make the things that are impossible and when you fail, get up and try and make them again

never let yourself feel ashamed about something you have created. always feel proud because you made it and there is something incredible about it and everybody deserves to have a voice

never give up, never surrender

never give up something that you love. always hold onto it, even if this isn’t the right time or project for it, there will be the moment for it to shine

never say that you’re bad or good at something, just let your work speak for itself

never feel guilty over what you’ve created. if it is bad or offensive, apologize for it. make amends. guilt changes nothing, acting does.

never make a game that is boring to you

never forget about the angry queer teens in small towns

Amazing! Inspiring! Thank you for writing this. I have a huge list of nevermakes I need to get to and reading this motivates me a lot. 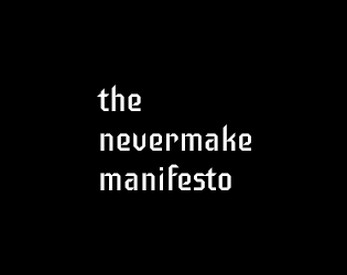